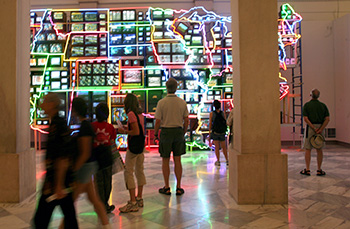 The Smithsonian American Art Museum will offer a robust series of public programs to accompany the exhibition, “Nam June Paik: Global Visionary,” on view at the museum through

Aug. 11. Korean-born Paik (1932-2006), known as the “father of video art,” almost single-handedly transformed video into an artist’s medium through his sculptures, installations, videotapes and television projects. Often lacing his work with humor and collaborating with artists for public performances, Paik had a major influence on late 20th-century art and his legacy continues to inspire a new generation of artists.

John G. Hanhardt, senior curator of film and media arts and the leading expert on Paik and his global influence, organized the exhibition with the assistance of Michael Mansfield, associate curator of film and media arts. Paik’s innovative spirit and playful approach to his life’s work will be celebrated in a variety of public programs ranging from scholarly lectures and gallery talks to films and family activities.

A daylong celebration of Paik’s artistic legacy, “Nam June Paik: Art and Process” is scheduled for Sunday, April 14. A symposium will take place from 1 to 4 p.m. in the museum’s McEvoy Auditorium; confirmed participants include Edith Decker-Phillips, independent scholar; Stephen Vitiello, artist; Jud Yalkut, artist; Greg Zinman, independent scholar; and Hanhardt. At 4:30 p.m., Mansfield will lead a gallery talk through “Nam June Paik: Global Visionary.” From 7 to 8:30 p.m., Ryuichi Sakamoto, Academy Award- and Grammy Award-winning musician and composer, as well as Steina Vasulka, artist, and Vitiello to perform musical works by Paik or those inspired by the artist.

Other programs offered during the exhibition’s presentation in Washington, D.C., are:

• PaikBot Family Day presented in celebration of Korean Children’s Day, with family-friendly craft activities and music, Saturday, May 5, from 11:30 a.m. to 5 p.m.

More information on these and other programs, including additional film screenings and gallery talks, will be available online at americanart.si.edu/paik.

About the Smithsonian American Art Museum

Note to Editors: Selected high-resolution images for publicity only may be downloaded from americanart.si.edu/pr. Email AmericanArtPressOffice@si.edu for the password.