As sleepwalkers we wander among Sinta Werner works uncertain of the boundaries between virtual and physical space, illusion and reality, representation and direct experience. Her practice explores the infinite notion of “in-between” and provides a refreshing view of the post-modernist theme of how multiple points of view undermine any expectation of an objective truth.
Sinta Werner [...] 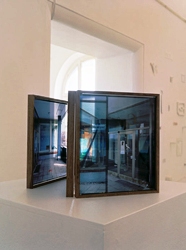 As sleepwalkers we wander among Sinta Werner works uncertain of the boundaries between virtual and physical space, illusion and reality, representation and direct experience. Her practice explores the infinite notion of “in-between” and provides a refreshing view of the post-modernist theme of how multiple points of view undermine any expectation of an objective truth.
Sinta Werner became an artist in Berlin’s cutting-edge art scene where she also assisted Franz Ackermann with his exuberant paintings and installations. Her MFA at Goldsmiths in 2007 introduced installations and site-specific works into her practice.

For Artkernel she describes her artistic vision.

Livia Dubon: Your work seems to create a special dimension between picture and space. Would you define it more as painting extended to architecture or architecture to painting?

Sinta Werner: It is both at the same time. When I make an installation, I start off with the original exhibition space and manipulate that space as if it were a flat collage. Afterwards it is brought back into real space. It is this element of going back and forth between two and three-dimensions that interests me. With my architectonic interventions, I want to create the illusion of flatness in space – as opposed to the traditional illusionistic painting in which the illusion of depth on a flat plane is evoked.

Livia Dubon: As most Installation Art, your architectural work presents space and light directly for us to experience, however it also represents these elements as traditional visual artworks. In other words, you help the viewer to experience perception first hand and at the same time you also create a projection of reality. It seems to me that you are going beyond the phenomenological “embodied perception” expressed by Merleau-Ponty and criticized by Foucault. What kind of “participation” do you wish the spectator to experience with your work? Do you want to engage him only intellectually or also “activate” him? What is perception for you?

Sinta Werner: I want the viewer to become aware of his own perception as well as his own presence and performance in space. Most of my works deal with a particular viewing point from which the illusion of a mirror or a double exposure is generated. By entering the space and moving around the installation, the construction of the illusion is revealed and the installation can be looked at as a model in real size, a stage-like provisional construction made from cheap building materials. The work is not about tricking the spectator but about the disillusionment and deconstruction of illusion. The installations follow the rules of photography or one-point-perspective and point to its limits in terms of its fixed point of view and its rigid rectangular frame. After leaving the point of resolution the installation appears broken, fragmented, sometimes distorted; the mathematical logic fails and collapses. I want to create a feeling of instability and disorientation in the viewer. I want to de-centre the viewer, to make him feel displaced or out of place and at the same time I want to make him aware of this state and to give him room to reflect on this. My aim is to activate the viewer physically in the first place and through that also provoke an intellectual engagement with the issues mentioned above. For me, perception is an active process that happens between our surrounding, the senses and the description in the brain. I think that there is a lot of imagination and anticipation involved in the process of perception and I wish to activate and question both. 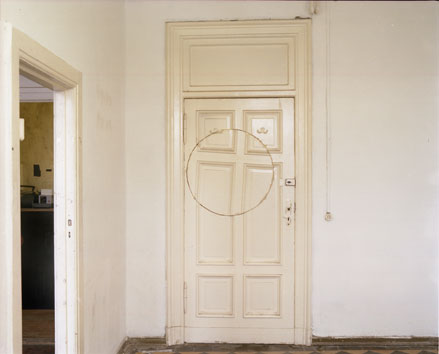 Livia Dubon: Your work sometimes appears to be otherworldly and mysterious. Would you say that it has surrealist elements?

Sinta Werner: I create situations that wouldn’t exist in reality, situations that wouldn’t follow logical rules. I would say that there are surrealist elements in my work in the way the viewer is able to enter a mirror. There are uncanny moments such as the moment where you wouldn’t get to see your own mirror image reflected in the imaginary mirror. The reconstructed architecture appears rather artificial which may also create a dreamlike, unreal feel.

Livia Dubon: How do you originate the idea of your architecture installations?

Sinta Werner: I always start off with a model of the empty exhibition space. Then I play around with rebuilding parts in model size also using Photoshop to try out different possibilities of manipulating the space. A lot of time is spent staring into the model, into the empty room, waiting for an idea. It makes me feel a little bit like playing God to work in these miniature dimensions.

Livia Dubon: What did you started to do first: installations or collages?

Sinta Werner: When I did my MFA at Goldsmiths College I started to work with collages and installations at the same time. In the beginning, collages served as a starting point or sketch for the installations. Now, both fields have become autonomous fields in my artistic practice. Besides from installation and collage I also work with photography, objects and painting installations.

Livia Dubon: Regarding your collages, do you have a particular artist you were inspired?

Sinta Werner: Not really, though I remember that I looked at a show of John Stezaker at the Approach Gallery in 2007 which impressed me a lot.

Livia Dubon: In an interview with Paul Carey-Kent you reveal that you were inspired by minimalist artists like Robert Smithson and Gordon Motta-Clark, whose works dealt with the concept of entropy. How do you feel your work relates with this concept? 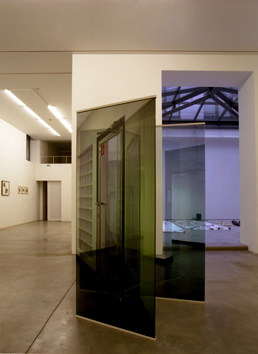 Sinta Werner: In my works, I like to juxtapose construction and deconstruction, I like to take architecture apart and divide it into fragments. In this way there might be similarities to Gordon Matta-Clark’s work in particular. But I think that I’m not so much concerned with the concept of entropy, but rather with the idea of dissolving a space. Most of my works somehow deal with the dissolution of space, for example when I try to dematerialize a gallery by constructing a spatial double-exposure, by splitting the space when I project an image of the room onto the room with a slight shift or when I try to paint negative shadows onto some objects in order to make them disappear.

Livia Dubon: Through the post-modern concepts of multiple points of view you are challenging the hierarchical model of Renaissance’s perspective. Do you also agree with the poststructuralist idea that each person is intrinsically dislocated and divided?
Sinta Werner: I am interested how installation art has a potential to reflect on the status of the subject in our contemporary society or is influenced by the so-called postmodern condition. Postmodernism rejects the idea of a centred subject that is relying on a belief system of universal and eternal truths. This was generally described as the demise of meta-narratives and of coherent explanation. It has become a main objective in postmodernist writings to draw attention to the diversity of human existence and to argue for multiple theoretical standpoints rather than broad, interpretative schemas. I would say that the postmodern subject has no stable identity – if there appears to be any identity that is only because we have constructed narratives of the self, which are themselves a product of social intercourse. Some would not even speak of the postmodern subject as having a self but, rather, as a multiplicity of selves.
Livia Dubon: “Grey Areas” (2008) at NETTIE HORN and “Empfang” (2008) at Coma create imaginary mirrors and are related with the idea of Foucault’s heterotopias and utopias. Other works present the illusion of a “unique point of view” undermining the certainty of an objective truth, which is  similar to the eastern concept of illusion: “Maya”. Are you interested in investigating also spiritual and/or social issues? 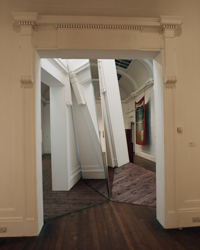 Sinta Werner: What interested me in particular in Foucault’s text about heterotopias was his description of the mirror that represents both – the utopia, as it presents the viewer who is looking at his mirror image in a virtual world – and the heterotopia, as the mirror helps us to make us aware of our presence in the here and now. The mirror has the ability to reflect, but also becomes a symbol for reflection. I like to turn the exhibition space into the artwork itself, to present rather a question mark than an object or a commodity. I wouldn’t consider myself as being interested in spiritual issues. But I do like to throw up philosophical questions that can lead to social questions also. That’s up to the person who looks at the work and interprets it.

Livia Dubon: Do you have a work that you prefer most or that in your feel represents your vision better?

Sinta Werner: The installation ‘Imperial Measurements’ that was presented within the exhibition ‘Magic Show’ in Blackpool is my favourite piece at the moment. After a series of mirror installations, this one represents most of all a splintered, fragmented space, a space that breaks into smaller bits, but at the same time grows like a cancerous ulcer and invades the exhibition space like colonialism would conquer new territories.